Happy 2019! Welcome to my fresh, new blog: Journey Santosha. This is home for my writing, and a place to document the journey of my life, my family life, my family’s vision for our future, and topics that are closest to my heart and personal development. Thank you for stopping by and sharing in the journey.

Happy New Year! There is something about the end of the calendar year that sparks optimism in me: a new year, a new opportunity for a fresh start. I used to make resolutions, but they fizzled pretty quickly. I’d make them in my head, never wrote anything down, and just forgot about them as I went about my days.

Then, a few years ago, G started a new New Year’s tradition: rather than making resolutions that we would break after only a few weeks, we choose a theme for the upcoming year. The theme is one word, or a short phrase: something to keep in our minds daily. By choosing a theme, we choose a direction to focus our energy and our direction for self-development. The theme is a reminder of who we want to be and where we want to go.

What does that even MEAN? Is it even a WORD? Just stay with me here. The OED defines optimal as “Best or most favourable; optimum.” Not the minimum, not the maximum, but the optimum. So this year, I seek “enough”: enough stuff, enough money, enough joy, enough work, enough play. Enough self-care, education, vacation, date-nights, fun family outings, laundry days and lint on the rugs, tears and struggle, joy and laughter.

Each New Year, I reflect on my theme for the previous years and adjust. I try to take what I learn from the previous year, apply that to the New Year, and move forward. I deeply believe that, without continuing to learn and grow, there isn’t much point to life. So my theme for 2019 is building on my themes from 2017 and 2018: Two years ago, it was Simplicity. And last year, my theme was Intentionality.

In 2017, with Simplicity, I explored minimalism. I felt choked and overwhelmed by the clutter of things in my home, my calendar, my life. Decluttering helped me clear space -- not just physically, but mentally as well. I purged “Things” that no longer served their purpose or brought me joy.

As the year closed, I found that 2017 wasn’t “Simple.” Our family experienced huge transitions. If I had looked forward on the calendar, I would have realized how much change we had in store for us. Instead, I focused on clearing physical space. I moved furniture around and made a lot of trips to the Goodwill. The big transitions snuck up on me.

For 2018, I wanted to build on what I had learned in 2017 with Simplicity, and chose Intentionality as my theme: living with Intention, choosing my life rather than having it chosen for me. I didn’t want big changes to sneak up on me again. But life is life, and has an interesting sense of humor.

2018, again, was a huge year of change: we woke up on New Year’s Day 2018 in California, and eight months later, we woke up 800 miles away, in Washington, where we hope to make a new home. The theme shifted as the year progressed: My focus on Intentionality in the beginning of the year was on me -- my intention to build a life that held meaning, where I could live up to my full potential.

By the end of the year, Intentionality shifted to the journey and vision of my family life and future. Was our move to Washington intentional? Yes and no. You don’t move 800 miles from your home of 40 years by accident. We, as a family, felt that California no longer served us and we needed new surroundings to continue to thrive. So we had good intentions for our move, but we could have been more intentional about it. The details and whys of our move are a subject for many other posts (it’s amazing how much can happen, and how much learning can happen in 5 short months!). Suffice it to say, it has been really hard, and full of learning.

2017 see-sawed me to too little. 2018 overcompensated (unintentionally, ironically) to too much.

To explain this kooky idea further, I have to go back to Minimalism. I watched that documentary about the Minimalists on Netflix two years ago, and since then, I’ve dreamed of that ideal “minimalist lifestyle”. The spare lines, the clean floors, the single suitcase that takes me around the world.

But over the last two years of my chaotic, messy, real life, I’ve recognized that there’s something of an all-white-walls-and-no-furniture vibe to the concept of Minimalism, an aura of deprivation. (Just search minimalism on Pinterest and you’ll see what I mean!) It’s not that I haven’t tried to cultivate the spareness and barrenness-- I’ve decluttered a LOT over the last two years: moving from the 3600 square foot house we shared with my mom, to a 1500 square foot house (that we were also planning to share with my mom), to an 800 square foot apartment takes a LOT of purging. And it has felt great, overall. My mind is clearer without things covering every surface. Yet I still feel like a failed minimalist because the trips to Goodwill continue.

Decluttering has not materialized as the end point of my minimalist journey. Instead, decluttering has become merely a point in a cycle: de-clutter, feel better, re-clutter, feel frustrated, de-clutter again. I now recognize in the the flow of things into and out of my life that the underlying ocean of me remains the same. There is a lack somewhere, that has not been addressed. A sense of deprivation or discomfort that I have sought to fill with new things. Our consumerist-driven culture constantly bombards us with the message that we can solve all of our problems with money. So as I have felt the discomfort of being in my own skin, I have turned to the comfortable habit of trying to find some thing that will alleviate that discomfort and make me a happy, better person.

The problem is, though, that things have only the meaning we assign to them: things are inherently just inanimate objects that take space and cost money and life energy to produce, procure and purge.

Where “minimalism” can suggest the deprivation of surviving with the absolute minimum amount of life, “Optimalism” suggests the best and most favorable amount. Enough.

Like mindful eating, Optimalism is an internal state -- a point of internal balance and contentment without excess. Every person’s point of enough and satisfaction with life (work, food, play, things, time) is different-- some of us need more “stuff” to feel satisfied, some need less. It is the mindful, internal barometer that has to decide.

So this is the year I cultivate Optimalism: enough.

What are your New Year’s rituals? Do you set a theme or resolutions? How do you keep yourself accountable?

Popular posts from this blog

What's It All About?

January 10, 2019
What’s it all about? There is a web of themes that will weave through this blog: Financial Independence, Personal Finance and Real Estate Investing, Building Habits, “Optimalism”, Positive Parenting. Diverse, yes, but all linked together, radiating out of my family’s Goal for our Future.
The Goal: Build enough passive income to become financially independent within three years. It is a big Goal, with a short timeline. Why the urgency, you might ask? Well, why not?

Setting a big, difficult goal is more motivating than setting a small, easy-to-achieve goal. Set a “10X Goal”, get excited enough and uncomfortable enough to push past perceived limitations. The risks are greater, but so are the rewards. Don’t get me wrong: the Goal hasn’t just appeared, fully formed, out of thin air, the work of a moment. It has been building up, growing in intensity and urgency over the course of a decade (at least, if not more).

The Goal has emerged from years and years of wishing: wishing things were dif…
Read more 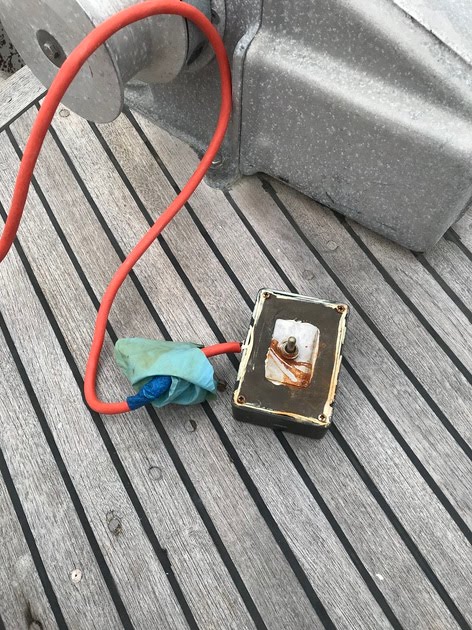 Any boat, but especially an older boat (ours was built in 1982) requires a lot of maintenance. With this inaugural post, we are opening a new section on this blog dedicated to more technical aspects of owning a boat.
The first project to complete was rehabbing the windlass. It is not entirely surprising it was not lowering at the time of the purchase. As you can see, the remote control that was built with the household components, have corroded quite a bit, despite the efforts to waterproof it: Inside the box things look even worse: Even the terminal block inside the v-berth was corroded, with some contacts having virtually no clean metal left to conduct electricity: We decided to replace the remote with a commercially produced one: And replace the shot terminal block a very basic but robust one you can buy at a hardware store. Ideally, I would have preferred a 12-pole stainless steel block to accommodate all the connections without grouping them together on the same screw (will have…
Read more